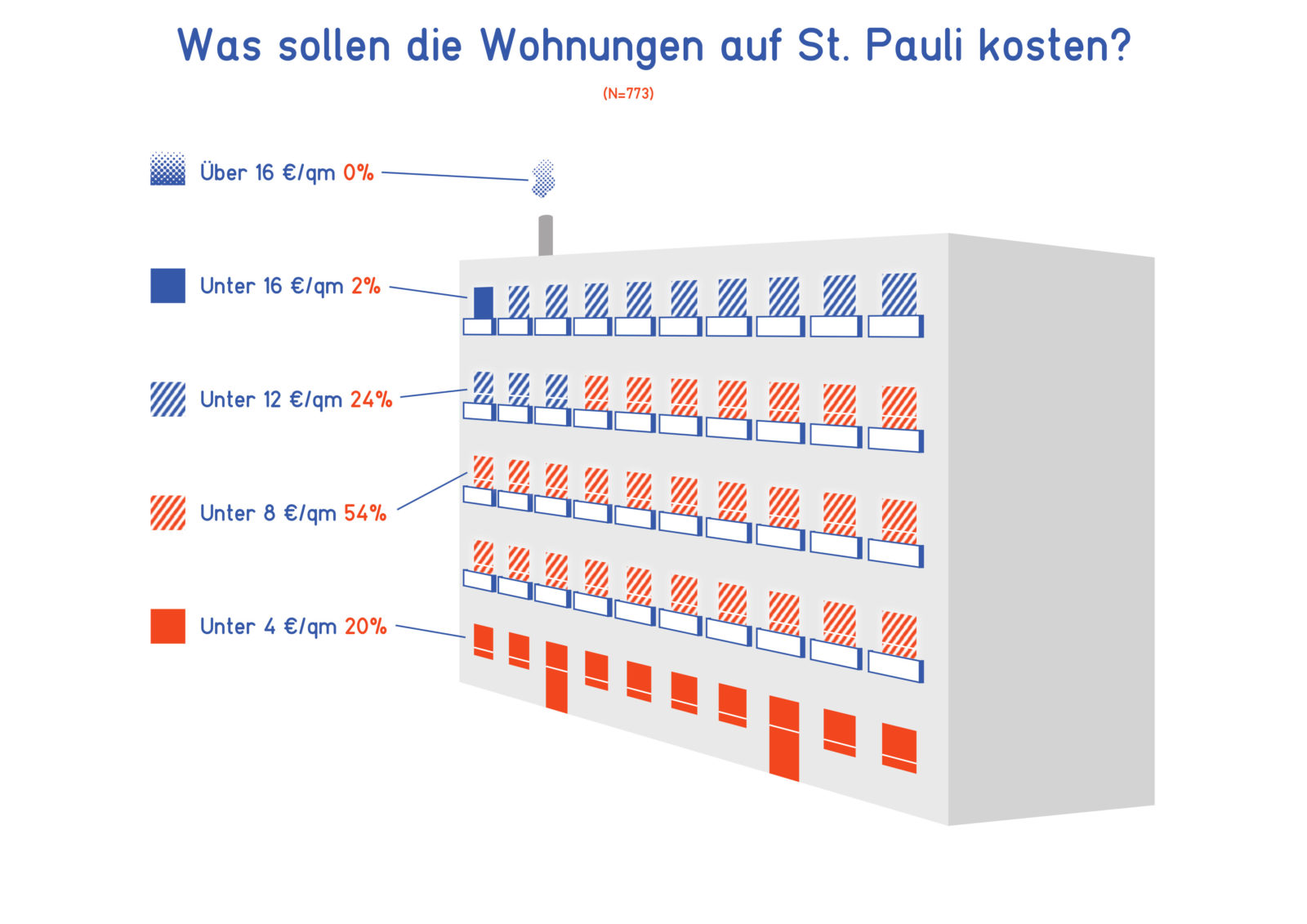 Here we  publish a translation of the groundwork for the architectural competition „Neuentwicklung eines mischgenutzten Quartiers am Spielbudenplatz in Hamburg, St. Pauli – Auslobung zum städtebaulichen Gutachterverfahren“. It is a short summary of the cornerstones that were negotiated between Bezirk Hamburg Mitte, Bayerischer Hausbau and PlanBude, based on the results of the PlanBude process, an extensive and intensive participative planning-for-all-process from October 2014 to February 2015. People wished for a lot of affordable living spaces. The answers from the PlanBude questionnaires
make it quite clear: 82% think there is too little social housing in St. Pauli. There should be a
maximised diversity of apartment forms for different living and residential models as well as
especially for population groups with low wages.

Collective spaces should be created, which strengthen the neighbourhood and encourage a variety of
zoning classifications. The new building should communicate with its environment on an architectural and open
spaced level. And the building should integrate itself into the area context, hence to carry the St.
Pauli Code (scroll down) forward. The opening towards the neighbourhood is supposed to create spaces which
allow communication and information exchange. Especially the utilisations which address themselves
more towards the neighbourhood rather than tourists should be placed at Kastanienallee and
Taubenstraße as an intersection with the surrounding area.

Anchor uses for the neighbourhood

Across the Spielbudenplatz the spectacular or „show“ side of the new ensemble will develop. Here drastic,
inconsistency, fragmentation and diversity clash the most and generate what forms the core of the
St. Pauli Code. The spectacular side of the Reeperbahn has to have an own signature, a high
frequency of entrances and has to also allow inconsistency in usage side by side. The wish is to
have places with originality, live music and spaces for dancing without any restrictions. Small unities,
affordable rents for businesses and opportunities for designing ones own outside appearance as well
as the design for the ground floor shall create spaces for the people of St. Pauli and Hamburg
including visitors. The former businesses should have priority to return.

Diversity and inconsistency: dramaturgy at the Reeperbahn
a high frequency of entrances
special design for the ground floor (strolling and lingering zone)
independent signature across the spectacular side Reeperbahn
Kiez related and fragmented (also in the usage)
day and night life: different zoning classifications
music, culture and spaces for night life
thinking the old fresh – return opportunities for former businesses

A custom fit component of St. Pauli is needed to make this new area a well organised complex at the
Reeperbahn. The right programming is essential for a grip within the Kiez. From the suggestions the
zoning classification can be clustered into three groups, which can make this location a productive, innovative
and attractive day and night area for St. Pauli.

FabLabs are open high-tech workshops for everyone. The Hamburg branch of FabLab, created at
MIT, with its digital laser printer, CNC moulding and 3D printers, shapes the technical centre of an
innovation cluster. The heart piece, a low threshold FabLab Café with a reception can also work as a
distributor, organizing system, room booking for shared offices, co-working spaces and a laundry
mat and thus can make the unlikely encounters more likely, which are the precondition for real
innovation: subcultural vibe meets nerd, pensioned engineers, designers, start ups and adolescent
foolishness. The importance is: St. Pauli is one of the most productive origins of pop music in
Germany. And the subcultures, driven by the music, determine the pulse for cultural trends, fashion,
design and product development. The Innovation Cluster is therefore thought together with the Music
Cluster with rehearsal rooms, studios, active clubs, performance areas, DJs or live music – and
carries the crucial location factor of St. Pauli into the future.

The new building at the Reeperbahn can generate an opportunity to create a music cluster at the
heart of St. Pauli, and thus to bring back a quite important character. The music cluster Reeperbahn
could sprout underground as a communicative complex, setting standards. A part from 10 rehearsal
rooms (15qm each) and 3 studios (25qm each), two spaces for experimental and subcultural
performances are planned (20qm each) and a shop for equipment rentals and sales (60qm). The
alliance with the innovation and the cultural cluster creates inter-communion spaces and guarantees
a low-threshold for different groups.
A new impulse for the Hamburg music scene is set with this fusion. The room opportunities serve as
an incubator for inner city production, deliver chances for networking, communication and inter-
communion information among the players, create the focus and presence of the local scene at one
central spot, stimulate synergetic effects throughout different branches and levels, and support
consumption and production to over-lap and entangle in each other. On the other hand positive
effects for this new construction, its residents and visitors are gained: linked to the site-specific
history of the neighbourhood, the history of Hamburg music production and innovative performanceformats will be carried forward. The scenes cultural capital will be over written onto the yet
untouched building complex and will make an address of its own. The settling by the creative mileus
will revive and inspire the surrounding area. The subcultural scene also lures new sorts of visitors
from beyond the Hamburg region, stimulating new public forms, taking care of the heterogeneity and
cultural diversity from the St. Pauli Code and enlightening the place with glamour, vibrancy and
gloss. In short: a nutrient ground can be layed for cultural innovation and dynamics.

Cultural spots secure the new buildings attraction in the long run. St. Pauli needs an addition with
class as to regarding contents – a space for cinema, performances, theatre at discourse able hight
would be an essential addition. Next to the described innovative clusters the Panoptikum, one of the
oldest wax figure cabinets, family owned since generations, one of the rather rare spaces at the
Reeperbahn also interesting for tourists during the day, is already an irreplaceable cultural good on
which you can read the complex popular entertainment culture. The new building would allow the
Panoptikum to expand itself contemporarily with a Café as a supporting leg, and to install wheel
chair appropriate elevators into the museum. The St. Pauli Museum would be a fit addition to the
Culture and Music Cluster with its extensive collection of the Beatle Era and the Alternative Culture
and a tourist attraction for the day time.

Therefore the urban development draft has to represent a most high range of zoning classifications and
business models as possible, which should be found in the further process. For turning the
ideas into a functioning whole, unfolding the cultural and social potentials from the PlanBude
process, a participative project development is essential for the next steps. St. Pauli Code
The tender for the urban planning competition started with a broad and deep, public and
participative planning process. The Hamburg district Mitte assigned the PlanBude to crack the St.
Pauli Code in intensive work with the citizens and under consideration of artistic and planning
instruments. Over 2000 contributions were made. The anticipation towards the planning is high: How

can this, what forms St. Pauli, be carried further into the new building site? 2. Small scale structures
Fragmentation enables such different stores, bars and meeting spaces to form themselves, lay close
to, stack, pile up and communicate with each other in spite of their inconsistency. 3. Low-Budget before Luxury
Not so long ago St. Pauli was one of most poorest city areas in west of Germany. St. Pauli is still one
of the few neighbourhoods in Hamburg where the most different classes meet, because those less
fortunate also go out and live here. The cultural diversity could also only emerge through inexpensive
rents for shops and apartments. Through the rapidly growing rents this balance is in danger. The
neighbourhood has not only lost its citizens, but its originality as well. 4. Originality and Tolerance
Personally imprinted stores, here the “grown”, originalities should return to the new area. The same
is also applied to the tenants of the apartments as well as to the people who were squeezed out of
St. Pauli. Exactly what once used to characterize the Reeperbahn and the Kiez is missing, everyday
a little more. The inconsistency is performed trivialized, but is lived less than before. 5. Appropriation and Vibrancy
Grubby glamour and and liveliness are demanded: occupied, placarded or tagged walls, an outside
presence shaped by tenants and store owners – instead of designed high glossed facades. The
former investor architecture of the past 10-20 years has not achieved to carry St. Pauli forward.
The wish therefore isn’t retort design but vibrant expression. 6. Experiment and Sub-Culture
The Reeperbahn gets bad grades from the people of St. Pauli – the entertainment too pre-formed,
unexciting and limited. Directly at the Reeprbahn spaces are missing which to not only perform
culture but also reinvent it. Experiments, sub-culture and cultural production are wished for instead
of ready-made trivial culture. 7. Open space without consume pressure
Next to these experiments public spaces are also demanded, which can be turned into shared places,
meeting places and spaces for inter-communion information and interaction, without having to be
limited by consume force. Spaces where nothing is offered but a sojourn quality and an inspiring
surrounding for the neighbourhood as well as for visitors.